As Rome was traditionally founded on seven hills,

so seven hills have been identified within the Theodosian Walls of Constantinople, New Rome. 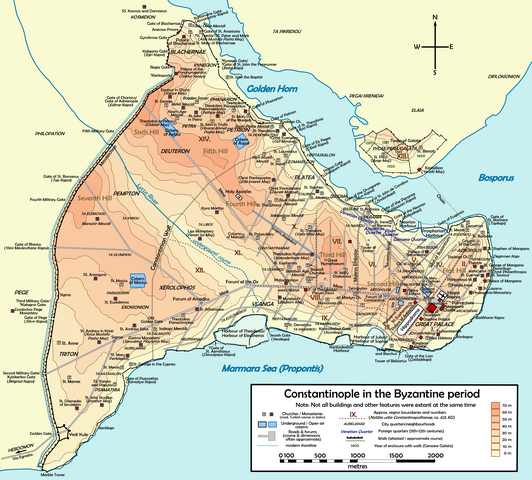 The theme of seven hills is found in Turkish culture today, as for example in the clothing company called Sevenhill, and in the university on the Asian side of Istanbul called Yeditepe (i.e. Seven Hills).

This is about a tour on Saturday, March 24, 2013, roughly following part of Chapter 16, “The Seventh Hill“, of Sumner-Boyd and Freely, Strolling Through Istanbul (revised and updated edition, London & New York: I.B. Tauris, 2010). There are no really spectacular sites along the tour. This fact itself makes the tour remarkable. The tour shows how many interesting things lie beyond the main tourist centers of the city. (See the map at the bottom of this page.)

My friend Cédric and I took the tram to Aksaray. We passed under an elevated boulevard to reach Valide Sultan Camii, constructed in the late nineteenth century, in the twilight years of the Ottoman Empire.

There was some restoration work going on, but the mosque itself was open. Indeed, a man told us this, went inside with us, and said something in Turkish about how the Sultan or Sultana would come here, three months in the year (I think), in a phaeton, and sit on the upper level. He may have wanted a tip, a monetary award for supplying this valuable information; but he did not get it from us.

We proceeded west along the southern side of Ordu Caddesi. Unfortunately the Murat Paşa Camii, “one of the oldest mosques in the city”, was on the northern side. Thus it was on the other side of a busy highway. We saw the mosque only from a distance.

We passed the structure below, which may or may not be the Ebu Bekir Paşa Mektebi [school] described in the guide book.

We deviated left from Ordu Caddesi in order to follow Cerrah Paşa Caddesi. We reached the mosque of Cerrah Paşa himself. Cerrah means surgeon. Apparently this pasha circumcised the future Sultan Murat III, who later made him Grand Vizier. The architect of the mosque was Davut Ağa, successor of Sinan. The hexagonal support of the central dome is peculiar.

Nearby we found a wall with this odd-looking old building behind it.

We saw no indication (on the street or in the guide book) of what the building was. The satellite image on Google shows a lot of trees to its east and south, with possible access from the west. Further investigation might be made another day.

Arcadius was Emperor of the East, 395–408, and one of his daughters was Pulcheria, whom I investigated in connection with another Istanbul tour on February 17, which included the column dedicated to Pulcheria's husband Marcian. All that remains today of the Column of Arcadius is its great base.

We sat in the park across from the column, then continued north to the Haseki Hürrem Külliyesi. We walked all around this, but found it closed for renovation. We did see a boy with a bicycle reach through the gate to remove an unlocked padlock and let himself in. But the man inside (father? uncle?) said we ourselves could not come in. Renovations would last a year, he said.

The Davut Paşa Camii is dated to 1485, before Sinan. Its single interior column stands right in front of the mihrab. I suppose this emphasizes that there is nothing holy about the prayer niche itself; what is holy is the direction that the mihrab indicates.

We headed down towards the sea, with food in mind. We saw a yellowish church there, and another church back up on the hillside. We walked up to investigate the latter. It was the Armenian Church of Surp Kevork.

A well-dressed family entered the church compound ahead of us. The gatekeeper said we too could enter, provided we did not take any photographs. He took us through the open door of a crowded church. Everybody was standing. Through the incense smoke, I could see a priest, who was intoning something, presumably in Armenian. Then a choir began to sing, and congregants seemed to be lining up to take communion. But people also wandered in and out freely. Those who left seemed to be in a sombre mood. Outside in the sunshine, adults conversed, while children ran around. A priest in colorful garb stepped outside for a cigarette. As it was Palm Sunday, a table was laden with the local version of palm fronds: olive branches.

Cédric took an olive branch. In fact olive branches should be plentiful in the region this time of year. Two weekends before, Ayşe and I had visited a village on the Marmara Sea, a few hours from Istanbul by bus. If anybody in the village was doing any work, it was trimming olive trees.

Back in Istanbul on Palm Sunday, at the Church of St George, a table near the entrance of the compound displayed incense, censers, and Turkish bibles. The incense was perhaps frankincense or myrrh, I suppose; the fellow attending the table explained that some of it was Turkish, and some Greek.

We left the compound and continued west down the street. On the corner, a shop offered services for baptisms, weddings, and funerals. A man on the corner talked to us about how the first Armenian Patriarchate, founded by Fatih Sultan Mehmet, had been here until it moved to Kumkapı. He named Turkish cities where Armenians had a presence until 1915.

We went back down towards the sea to look for a place to eat. We saw many bars and fish restaurants; a film was being made among them. (Apparently such filming is common in this area, called Samatya.)

Back up on the main road, we entered a pideci. When I started ordering in Turkish, the waiter told me to use English, so he could learn. But when I switched to English, he told me to slow down. (There's a scene in Fawlty Towers like this.) Another customer had olive branches, presumably from the church; he gave some of them to the waiter, who walked around the restaurent, looking for a way to display them. Then he tried to give them to us; but Cédric showed that he already had some.

Thus it is hard now to tell that the mosque was ever anything else.

Outside the mosque, there was a saint's tomb, the tomb of Sümbül Efendi. I remembered that sümbül was hyacinth; and some hyacinths were growing in the nearby graveyard. I asked a passing woman with long black hair whether these flowers were indeed sümbül. They were, she said, and didn't they smell nice? She continued on her way, but I saw her pause to say a prayer in the direction of Mecca. She did not wear a headscarf. We did not see too many women who did, even though they might be believers: they were not given to advertising this fact.

We decided to walk north to the nearest tram station. According to Reha Günay, A Guide to the Works of Sinan the Architect in Istanbul (Istanbul: YEM Yayın, 2006), there were two small Sinan mosques along the way that we could visit. The first of these was Ramazan Efendi Camii. It was locked, but I took this photo through a window. Evidently the roof is wooden; there is no dome.

We continued north on Altımermer Caddesi. This divided into Eski Vezir Sokağı (“Old Vizier Street”) on the left and Vezir Caddesi (“Vizier Avenue”) on the right. In between, a cat slept on a low roof.

Just across Old Vizier Street was this old fountain, with no verbal indication of its history.

Odabaşı Behruz Ağa Camii was another domeless mosque. A wooden vestibule or narthex had been added.

Inside the vestibule, we found a tour group. Their guide was speaking to them in Turkish, but many of them wore earphones, perhaps to receive a translation. For some reason I thought some of the foreign tourists were from Iran, while others may have been from Europe. The tour must have had a quite specialized purpose, to visit this little mosque.

We caught the tram. Cédric stayed along the Golden Horn, but I walked up to İstiklâl. At the Roman Catholic, Franciscan, Santa Maria Draperis Church, a message from the new Pope Francis was displayed in Turkish:

Let us start in this way…the way of brotherhood, love, and mutual trust. Let us pray continually for one another, for the whole world let us pray, that there may be great brotherhood.

There were several visitors inside the church. A young Turkish couple bought a candle to light.

At an exhibition space at the Taksim end of the avenue, there was a book fair. One of the publishers present was Kabalcı, which, in seeming imitation of the Loeb Classical Library, has a series of classical texts with facing Turkish translation. Like Loebs, the Latin works are bound in red, and the Greek, green. One of the latter, I could have used last summer: it was Heraclitus. I bought it now. I also bought the Greek–Turkish dictionary. I already had a copy of this, and was using it for our translation of Euclid. But I wanted the luxury of having a copy both at home and in the office. The Kabalcı books being half price, I took this as a sign of approval of my pursuit of this luxury.